ATL will pave the way for a 4-star hotel; a mixed-use development on 13 acres with an initial 60,000 square feet of office space; and a travel plaza on 2.8 acres that will feature a convenience store, fueling station, and service center. The facilities will be situated west and southwest of the domestic terminal on land currently occupied by the West Economy Parking Lot, former rental car facilities, and the taxicab staging area. Learn more about the Hotel & Travel Plaza project

Service Animal Relief Areas (SARAs) are designed to accommodate passengers' pets and guide dogs. In compliance with the Federal Aviation Administration, wheel-chair accessible SARAs are located in every concourse. They provide the necessary facilities for pets without having to exit the terminal to visit the pre-security dog park. All SARA locations are now open near gates T7, A10, B33, C19, E14 and F7, as well as D-Centerpoint. Learn more about Support Facilities projects

Hartsfield-Jackson leaders have officially unveiled 102 electric vehicle charging stations at the Airport as part of ATLNext. These stations should aid in ATL’s efforts to reduce greenhouse gas emissions from 2008 levels by 20 percent by the year 2020. Learn more about EV charging station locations

The security checkpoints at ATL are now equipped with 22 new Automated Screening Lanes (ASLs). The ASLs include a conveyor belt that automatically returns bins to the start of the lane, speeding up security processing by as much as 30 percent. Learn more about using the ASLs

One of the major projects underway is construction of two giant canopies that will extend from the North and South sides of the Domestic Terminal. While their appearance will be grand, the canopies will also improve the guest experience, protecting passengers from weather conditions and improving traffic flow by housing elevated walkways between the parking decks and terminal. Learn more about the canopy project

This deck, adjacent to the SkyTrain Gateway station next to the Georgia International Convention Center, is connected to the Airport via a 2-minute ride on the SkyTrain. This is a fast-track project, with construction commencing once design elements are complete. The site has been cleared and excavation started. Structural work will begin in early 2018, with completion expected by the end of 2019. The new parking deck is expected to have 5,700 spaces on seven levels, incorporating an elevated pedestrian walkway to the SkyTrain where passengers can connect to the Domestic Terminal. As part of ATL's ongoing mission to become one of the world’s greenest airports, this project is seeking Parksmart Certification, the LEED equivalent for parking decks.

ATL will undergo a phased expansion of facilities, with a goal of adding up to 1 million square feet of warehouse space. At the same time, ATL will construct a vehicle staging area to relieve cargo truck congestion, and also add parking capacity for cargo aircraft and vehicles. The work is expected to total more than $200 million in upgrades. Learn more about the Air Cargo projects

Eight phases of pavement replacement have occurred across five taxiways. A total of 34,000 square yards of pavement has been replaced, along with more than 300 LED light fixtures. The remaining phase of these upgrades impacts the Delta TOC (Maintenance) Ramp. We are coordinating with the FAA to obtain permission to allow aircraft leaving the ramp to have the flexibility to exit left or right. This modification to standards would significantly benefit air traffic control movement and safety of aircraft operations across the airfield.

The passenger boarding bridges at select gates on the Domestic concourses are past their life expectancy, causing replacement and renewal at these gates.

Under the Cargo 2A/2B project, we are currently preparing the site for an increase in cargo operations; initial activities are currently underway. This necessitates relocation of segments of Sullivan Road, as well as public utilities. Ultimately, we will construct two new cargo facilities, each at 250,000 square feet. Learn more about Air Cargo projects →

Replacement of the oldest fire station at ATL is underway. The new facility will accommodate an increase in the number of firefighters, including support spaces for equipment. Learn more about the Support Facilities projects

Construction has been completed on a new Domestic commercial vehicle and taxi staging area, including a taxi driver assembly building. A new bridge and roadway provide access to the hold lot.

Airside work will occur in phases over the next two decades, beginning with the replacement of taxiway and runway pavement. The project includes two new end-around taxiways, airfield pavement replacement, and the construction of a sixth runway. Learn more about the Airside projects

Renovations have been completed at the Airport's Security office to update facilities and improve the queuing area.

A new ATL West parking deck will be constructed first. This deck, adjacent to the SkyTrain Gateway station next to the Georgia International Convention Center, is connected to the Airport via a 2-minute ride on the SkyTrain. The new Park-Ride lot on Sullivan Road will provide 1,000 additional parking spaces for customers. The domestic terminal North and South decks, rising 4-8 levels each, will be constructed following the completion of the new ATL West Deck and the Sullivan Road lot. Learn more about the Parking Deck projects

Phased renovations of concourse hold rooms are underway; new ceilings, windows, and seating lend to a modern, open feel at the gate waiting areas. Gates on the South side of Concourse T have been completed so far. Of ATL's 193 hold rooms, 116 will be modernized.

The replacement of Fire Station 40 will take place early in the program, with the new LEED-certified facility due to be operational in 2018. ATL will also undertake a project to relocate and update the staging locations for the commercial vehicles and taxis that service the airport. The Gate Gourmet and Delta Air Lines cargo operation will also be relocated. These changes will reduce congestion on the roadways and improve customer service. Learn more about the Support Facilities projects

Gate F3/F3A is undergoing an expansion to accommodate the Airbus A380, a double-deck, wide-body airplane that can seat up to 600 passengers. This expansion will not only allow for an A380 on Concourse F, but it also will greatly shorten the walking distance to Immigration and Customs for passengers. Learn more about the gate expansion

A brand new digital board greets passengers at the top of the escalators as they exit the plane train toward baggage claim. Measuring 27 feet wide by 7.5 feet tall, the large-scale screen welcomes passengers to Atlanta with messages from the City of Atlanta, Georgia leaders, hometown heroes, and Hartsfield-Jackson. Formerly the site of the beloved Spirit of Atlanta mural, the notable image of the young girl in Centennial Park has been digitized and is also in rotation on the board. Approximately 95% of passengers exiting ATL use this path to baggage claim and ground transportation.

A New Era for ATL
From Terminal to Takeoff –

ATLNext is the Airport’s new development program. It consists of a series of projects over the next 20 years designed to boost capacity, renew and replace existing facilities, and enhance ATL’s aesthetic appeal.

These projects, which fall under six general areas, will help secure Hartsfield-Jackson’s position as the world’s busiest and most efficient airport, and further bolster the Airport’s goal to provide the best possible customer service while meeting passengers’ changing needs. 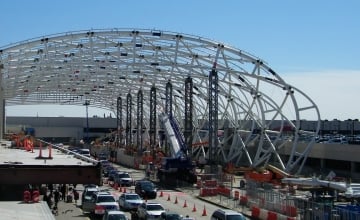 Please be advised that the Parking Deck Renewal Project at Hartsfield-Jackson is underway. Portions of the lower level of the South deck have now been closed and traffic impacts are expected. Shoring will occur in phases; deck level closures and traffic impacts will change as the project continues. Please allow extra time to arrive; … Continue → 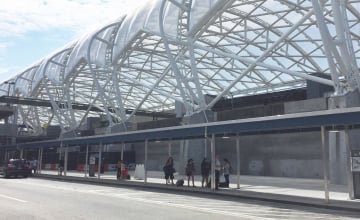 Here at the City of Atlanta’s Hartsfield-Jackson Atlanta International Airport (ATL), we sincerely acknowledge the concerns that our small business partners are facing, particularly during the current coronavirus crisis. Many of you have shared a number of issues that you feel can be addressed by ATL leadership to aid the small business community and help … Continue →